My residence in Freetown

Residence
New site, Oguru, Calaba Town - 1 Freetown (Western Area Urban) SIERRA LEONE
Wishes
It's Free
We don't need anything from you. You can give whatever you feel like.
Features 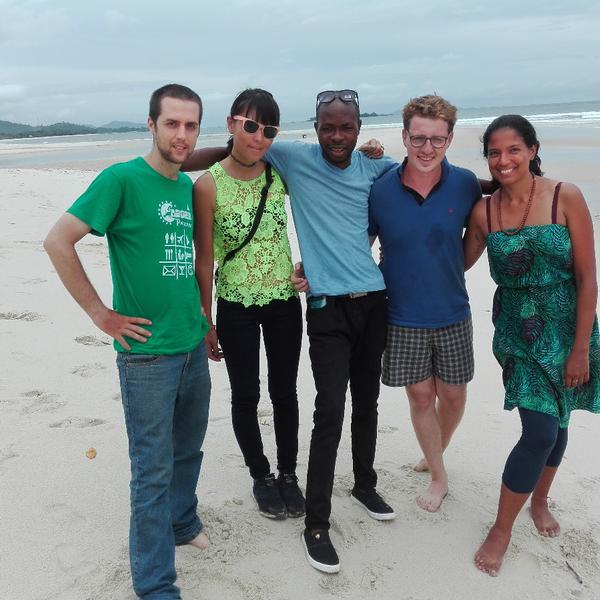 I'm cool and fond to be with and also easy-going and positive, social man.

I like living with many hobbies mainly sports; hiking, climbing, mountaneering, tennis, skiing.

I like learning new things and travelling very much.

"Travel while you’re young and able. Don’t worry about the money, just make it work. Experience is far more valuable than money will ever be."

With its palm-fringed beaches, breathtaking mountains, tropical rainforests and vibrant culture, Sierra Leone is one of West Africa’s most seductive destinations.

Whether you want a winter escape to the sun to some of the best beaches in Africa, to immerse yourself in its rich heritage and traditions or have the freedom to explore the beauty and charm of this undiscovered paradise, Sierra Leone offers an exciting and inspiring adventure to remember.

Experience the unrivalled friendliness and hospitality of our people. Relax at a beach-front baras you watch the sun set over the Atlantic. Lose yourself in the bustling and colourful streets of Freetown. Journey back in time to the dark past of the slave trade. Hike the highest mountain in West Africa.

Eat sweet fresh mangos plucked straight from the tree. Wake to the calls of chimpanzees and monkeys in the rainforest... and there are many fascinating historic sights, monuments and relics to see. Keep your eyes open and you never know what you might come across! Around the next corner, there could be a national cultural show where traditional dancers gyrate and revel to the drums and music.

The people of Sierra Leone are well known for their friendliness and hospitality and life is taken at a very relaxed pace.

The restaurant scene in Freetown offers a wide variety of international cuisine including Lebanese, European, Korean, Japanese and Chinese. African restaurants, including Senegalese and Ghanaian, also offer a taste of the continent but for a real taste of Salone, local is the way to go. Rice is the local staple accompanied by plassas (sauce) such as cassava leaf, groundnut soup, binch or stew with chicken, beef and/or fish and served in generous portions. Beef and chicken dishes are widely available but fish is king, especially along coastal areas where barracuda, groupa, snapper, lobster and other fish are widely available. Also look out for street food including sizzling goat or beef skewers, fried plantain, roast cassava tuber and coconut cakes.

Buy freshly plucked juicy sun ripened fruit, including pineapple, mango, paw paw (papaya), banana and oranges from market women, situated outside any of the main supermarkets. For drinks, try palm wine, commonly described as the drink that comes ‘from God to man’. Drawn fresh from oil palm trees, palm wine is a natural and cheap low-alcohol drink especially favoured in villages. Be wary of buying in Freetown as it is often watered down. Alternatively, beer drinkers can sample Star, the national lager brewed with sorghum purchased from Sierra Leonean farmers, and available ice cold in most bars and restaurants throughout the country. For non-alcoholic refreshment try fresh coconut water served straight from the shell on street corners or tangy ginger beer.

Sierra Leoneans are well known for their love of music. It is part of the fabric of everyday live in and you’ll hear it everywhere - be it pop music belting out of bars and clubs, warm reggae in taxis or poda podas, or local hip hop across the radio waves at street side stalls and markets. For so long dominated by US and regional tunes, Sierra Leone rap and reggae artists are finding their voice and their music is growing ever more popular.

Try any nightclub and you’ll be whisked away by dramatic lyrics and profusion of sounds and beats inducing you to dance the night away. Those looking for live music should sample reggae night on Thursday at Aces nightclub, where the Sierra Leone Refugee All Stars play when in country, or China House on a Friday.

The rainy season starts in May and ends in October, while the dry season is between November and April. The hottest months of the yearare March and April and the most pleasant time is September to February with bright blue skies most days and temperatures in the high twenties and low to mid-thirties.
In July and August it can get exceptionally wet and humid. Bring appropriate clothing depending on the time of year.

Sierra Leone is nestled between Guinea and Liberia on the south-west coast (the ‘hump’) of Africa, 900 kilometres north of the equator. It covers an area of 73,326 square kilometres (27,925 square miles), including some 360 kilometres (212 miles) of North Atlantic Ocean coastline offering some of the best beaches on the continent.

Sierra Leone has several breath-taking mountains, ideal for hill-walkers and climbers, including Mount Bintumani, the Wara Wara Mountains, the Loma Mountains, the Sula Mountains and the Tingi Mountains. The capital, Freetown, is situated on the northern end of the Western Area Peninsula, framed by the majestic Sierra Lyoa mountains rising 1000m (3280ft) behind it.
SEE ALL CITIES
About Barter Week